There are many great detectives whose adventures have influenced my writing. However, the Old Man in the Corner has always fascinated me particularly.

He is often compared to Sherlock Holmes and is undoubtedly a detective of that ratiocinative type, using logical deduction to solve mysteries by spotting details that the police have overlooked. However, the Old Man in the Corner has a few qualities that make him unique.

Firstly, there is the nature of his investigations, if one can call them that. He takes no clients and visits no crime scenes. Instead he relies on newspaper accounts and court proceedings to furnish him with all the details that he needs. However, this is all he requires to solve cases that have baffled the police.

Then there is the mystery of the Old Man himself. We see him through the eyes of a young journalist, Miss Polly Burton, who meets him at the A.B.C. tea shop in London. She doesn’t know his name or anything about him (although in one story she thinks she might have figured out something of his past), only that each time he appears at that table in the corner he will bring the solution to another case.

Finally, he is a curiously amoral character. While other detectives, like Holmes, seek to help the police or those who have been wronged, the Old Man in the Corner has no interest in bringing criminals to justice. Indeed he appears to relish the idea that they are getting away with these audacious crimes. Instead he solves these cases simply for his own amusement (and maybe for the satisfaction of showing off his intellect to Miss Burton). 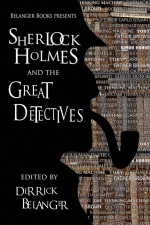 These very things that interest me most about the Old Man in the Corner made it seem very unlikely that he would ever team up with Sherlock Holmes to solve a crime, which was the brief for the new collection Sherlock Holmes and the Great Detectives. However, how could he resist pointing out the mistakes in an account in the Strand Magazine by that most famous of biographers, Dr. John Watson?

If you can’t wait to learn more about the Old Man in the Corner, you can find the original collection of short stories by Baroness Orczy at Project Gutenberg. My own story, The Stanforth Mystery, will appear in Sherlock Holmes and the Great Detectives which is available to pre-order now on Kickstarter and is due to be published in June 2020.

May your adventures be full
of mystery and magic